I like the idea of New Year’s and fresh starts and throwing off the bad habits of the old year. But I also think we set ourselves up to fail if we start making resolutions. So instead of a resolution, I’m making a, shall we say, re-energization. And it’s going to start with the 12 billion skeins of handspun that I’ve spun and done nothing with.

I don’t know many other spinners, so I don’t know if we all do the same thing, but when I get a bump of fiber, I have a vague notion of what I want to do with it (weight, fractal, n-ply, etc) and spin it accordingly. Then I wash it and thwack it and skein it up and put it in my yarn cabinet, and that’s the end of it. The whole act of spinning it feels like a finished project to me.

I’ve knit exactly 3 things with my handspun. This cat (the one in front – ha!), for a friend who was going through chemotherapy:

These mitts, for a spinners’ swap on Ravelry (last year):

And this scarf, for a spinners’ swap on Ravelry (this year):

I counted, and I have 36 skeins of handspun sitting in my yarn cabinet! Shameful! So as part of my re-energization, I wound all of those skeins into center-pull balls, so they’ll be ready for me to knit up. Here’s the chaos of yesterday: 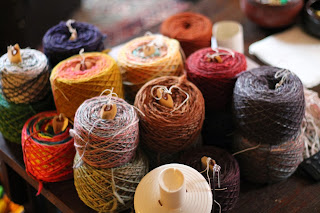 All wound up with someplace to go! Look how pretty! 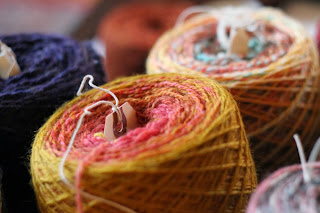 It shouldn’t be that hard to find a nice pattern for these. I’m thinking maybe (MAYBE) I’ll try to use one handspun each month. Is that too resolution-y? We’ll see.